Here is the Crash Course Video on Circular Motion:

Here’s a nifty site from NASA which tracks most of the satellites in orbit around the Earth. Amazing!

And here is an animation showing the sped up history of space junk.

Remember how we always treat inertial mass, and gravitational mass the same? That is, we assume the mass of an object due to its inertia, is equivalent to its mass due to gravity. This is called the equivalence theorem, and folks like Galileo, Newton, and Einstein believed it to be true. But what if it isn’t?  Check out this article about research that is testing this theorem. So cool!

And here is the planning of the above stunt:

Click on the image below to play. Go to the site and play around with placing the ladybug and the beetle on the turn-table and give them a spin. Check out the “Rotation Tab” to see graphs of the motion. So nerdy. So awesome! 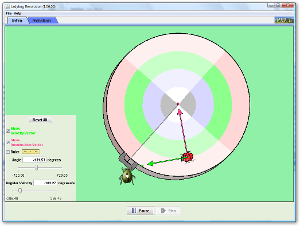 I will add new content to the top, so that you don't have to scroll down all the time. Reverse Chronological Order is how I roll geeks!

Look under your class’s tab for instructions on how to get these reminders as a text message.

Taking all those cool Newtonian Mechanics concepts from Physics 11 into the world of 2-D vectors, and then enjoying some quality time with Electricity and Magnetism.

Your chance to finally spend a whole year talking about Physics! Yippie! Here we study matter and energy and discuss the other 95 percent of the universe too!

Nerd Alert! A chance to go deep, spread your wings, and learn about science with like minded peers.